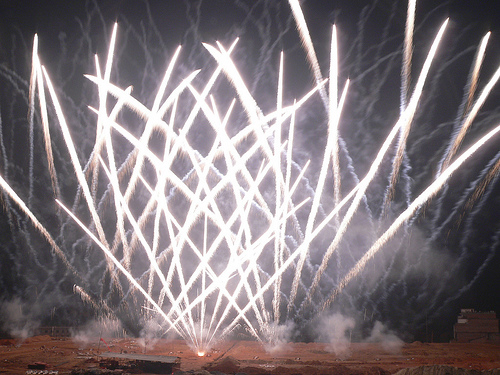 MAFF Fireworks Show – Laplata , MD
On April 7th the crew at Intergalactic Fireworks / High Energy Pyrotechnics (our professional firework show company) set up an awesome show at the MAFF Festival (Mid Atlantic Fireworks Festival.) The whole show was set up using a program called Finale Fireworks using 16 modules on the cobra firing system. While setting up the show we had 2 segments in mind first consisting of tons of comets, zipper cakes, and smiley face shells and then moving on to more shell breaks and fast paced comets/mines as the song changes. Most of this show was made with 1.4 grade fireworks, with some 1.3 thrown into the mix. The show lasted for about 6 minutes but took at least 10 hours of hard work to setup, not even including the time it took to set up on finale fireworks. Finale Fireworks is a program that helps professional pyro technicians setup shows by dragging and dropping assorted effects on a timeline which then calculates how long a shell takes to go up into the sky and break. Right before the show starts one buttons pushed and the whole show is fired in a perfect sequence, choreographed to music. [embedyt]https://www.youtube.com/embed?listType=user_uploads&list=intergalacticpa[/embedyt]